This week’s Drilldown will address items (included below) from NewsBites Issue 53 and Issue 54, both of which focus on the issue of maintaining security on remote access capabilities.

“One of the most important things you can do, even if you do not use any of these [remote access] products, is to ensure that any administrative interfaces for these devices are accessible only from management networks or VPNs. Limiting access will prevent the vast majority of the exploits used against these vulnerabilities.” 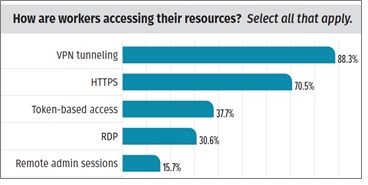 From “How Are Remote Workers Working? A SANS Poll”

Web-based and remote desktop access are common parts of the mix and need to be kept secure.

The second item points to attackers already scanning for critical patches released by Citrix for its gateway appliances. Vulnerabilities in remote access and other perimeter gateways act as “force multipliers” for attackers, and they are actively searching for missing patches and rapidly launching attacks. Security teams should work with IT and network operations to take immediate steps to reduce risk (such as securing management interfaces) and prioritizing patching of perimeter security appliances and gateway software.

The U.S. National Security Agency (NSA) released guidance to help organizations secure their IPSec VPNs. Many organizations are using these to enable their employees to work from home. The NSA also released a document with information about configuring IPSec VPNs.

[Pescatore] Related to this item and the one about the USCYBERCOM warning of critical vulnerabilities in Palo Alto Networks' PAN-OS based products, Johannes Ullrich of SANS put forth great guidance earlier in the year about critical vulnerabilities in security and VPN appliances. SANS published that guidance as part of the SANS 2020 Top New Attacks and Threat Report, available at www.sans.org/reading-room/whitepapers/analyst/top-attacks-threat-report-39520.

[Murray] This guidance seems to assume that all VPNs will terminate on a network "gateway." While there will be a lot of these in a work-from-home situation, I prefer to terminate VPNs on applications rather than on networks or operating systems.

The last two weeks highlighted yet again security problems with software and devices that are supposed to protect our perimeters. Most notable, F5's BIG-IP devices were found to suffer from a trivially exploitable remote code execution vulnerability. This vulnerability is already heavily exploited, and a vulnerable, badly configured device was likely exploited over the weekend. But F5 wasn't alone. About a week ago, Palo Alto Networks reported a problem allowing authentication bypass in certain configurations of its devices. And less noted, but still important, were vulnerabilities in the open source RDP gateway Guacamole. As a cheaper alternative to commercial solutions, some organizations implemented this solution to provide controlled access to RDP services for remote workers. One of the most important things you can do, even if you do not use any of these products, is to ensure that any administrative interfaces for these devices are accessible only from management networks or VPNs. Limiting access will prevent the vast majority of the exploits used against these vulnerabilities.


Citrix Patches 11 Vulnerabilities in Networking Products; Someone Is Already Scanning for Vulnerable Installations

[Ullrich] The XSS vulnerability is particularly interesting here. The impact of XSS vulnerabilities is often underestimated. In this case, the XSS vulnerability can be used to execute code on the device. Exploitation has been demonstrated in a YouTube video, but code for the full exploit has not been made public yet. The victim, an administrator currently logged into the system, will have to visit a malicious website to trigger the exploit chain. The result is full access to the device for the attacker.

[Honan] Given the large number of people now working remotely during the coronavirus pandemic, attacks against remote access points, such as Citrix gateways, are on the rise. These vulnerabilities are already being actively exploited and should be patched as quickly as possible.

The Register: FYI: Someone's scanning for gateways with those security holes Citrix told you not to worry too much about

The Register: Citrix tells everyone not to worry too much about its latest security patches. NSA's former top hacker disagrees