FireEye uncovered a new piece of ICS malware that they released today and their way of approaching it both to the public and in pre-briefing to the media has been outstanding. The malware is not in the wild, is not a threat to the industry, but offers lessons learned and I believe the FireEye/Mandiant team's handling of it deserves a good nod. This blog post will explain the background context to the malware, the details of the malware with my thoughts, and why it is important.

On April 25th I noticed the S4 European agenda noted that Rob Caldwell of the Mandiant ICS team would be doing a presentation on new ICS malware. I posted the blog here with some thoughts on what this meant for the community. Personally, I'm excited about DigitalBond's inaugural ICS conference in Europe (the long running S4 in the US and Japan has always been a valued contribution to the larger community). I will offer one small critique though that is not meant to be negative in tone. The DigitalBond website lists that the malware is in the "wild"; the ICS malware that Mandiant released details about this morning, titled IRONGATE, is not in the wild, in my opinion. "In the wild" does not have a strict definition so I don't think DigitalBond did anything wrong here, they were being extremely good stewards of the community to bring this information forward but when I consider malware "in the wild" I look for something actively infecting organizations. I was fortunate enough to exchange messages with Dale Peterson, who runs DigitalBond, and his understanding of the importance of the malware while avoiding hype matched my own. Shortly stated, he is spot on with his approach and I'm looking forward to the presentation on the malware at his conference. It is important to keep in mind though that this malware is more of a proof-of-concept or a security research project but still important. I will cover these details in the next section though.

After posting my blog I was able to get some insight into the malware from the Mandiant team under an embargo. I normally wouldn't talk openly about the "behind the scenes" discussions but I want to call attention to this for a very heartfelt kudos to the Mandiant ICS team. I'm not a journalist and in no way could help the FireEye/Mandiant public relations (PR) effort with regards to the malware they were releasing. Like it or not this kind of PR has value to companies and so capitalizing on it is a big motivation to any company. But they wanted to run their analysis by me for outside critique. This is a lesson many companies would benefit from: no matter how expert your staff is it is always valuable to get an outside opinion to ensure you are defeating biases and groupthink. Luckily for both the Mandiant team and myself I was excited about their thoughts. They called attention to why the malware was important but were careful to note that it is not technically advanced, it is not an active threat, and that there should be caution in overhyping the malware itself.

IRONGATE is the name for a family of malware that the FireEye Labs Advanced Reverse Engineering (FLARE) team identified in late 2015. The malware targets a simulated Siemens control system environment and replicates the type of man-in-the-middle attack seen in Stuxnet. The man-in-the-middle attack allows it to record normal traffic to a PLC and play it back to an HMI. It has a number of decent capabilities like anti-Virtual Machine checks and Dynamic Link Library (DLL) swapping with a malicious DLL. In many ways it looks like a cool project although not technically advanced. The most important aspect of the malware itself is that it shows the interest and understanding of impacting ICS by the authors. The full report by FireEye has a good coverage of the malware. Moving past the technical paper though there are a few key points to extract out about the malware itself. The following is my analysis and should not be considered definitive:

With what appears to be a bit of downplaying the malware the question remains: is this important and why? The answer is: yes it is important.

Why Is This Important?

I'm personally not a huge fan of naming malware, especially malware not in the wild, so I will admit I'm not crazy about naming this tool "IRONGATE" but this is the state of the industry today and I would expect the same out of any security company. The malware is not in the wild and in my opinion looks more to be a research tool than it does a bearer of things to come. So why is it important? Simply put, we do not know a lot about the ICS specific capabilities and malware in the community. In other words: we do not have much insight into the ICS threat landscape. We often have overhyped and inaccurate numbers of incidents in the community (Dell's 2015 review stating there were hundreds of thousands of ICS cyber attacks) or abysmally low numbers (the ICS-CERT's metrics of ~250 incidents a year which are primarily reported from the intelligence community and not asset owner themselves). Somewhere in between those two numbers is the truth pertaining to how many cyber incidents there are each year in the ICS community. A much smaller portion of those incidents are targeted espionage, theft, or attacks. And yet we only know of three ICS specifically tailored pieces of malware: Stuxnet, HAVEX, and BlackEnergy2. Over focusing on the malware instead of the human threats who intend harm is a mistake. But malware is still the tool of choice for many adversaries. So learning about these tools and the tradecraft of adversaries is extremely important. Yet we are lacking insight into those data sets. This makes the IRONGATE malware more interesting in the ICS community than it would be in an IT security discussion.
Here are, in my opinion, the three most important takeaways from this piece of malware.

In closing, I would caution the community to not overhype IRONGATE. The Mandiant ICS team did not overhype it nor should journalists. It could be a resume generating event to go to your management and claim that the malware itself is a reason for security investments at the company. But this is still an important find. Going to decision makers and ICS organizations and simply asking: "How would you find this if it was in your network?" is an important question and exercise. Hype is not needed to show why this is worth your time to discuss and counter. Ultimately, as we consider this malware and capabilities like it we as a community will move to better understand the threat landscape and counter the capabilities we have not discovered yet. Defense is doable — but you actually have to do something, you cannot just buy a product to place on the network and claim victory.

Robert M. Lee is the course author of ICS515 - Active Defense and Incident Response and the lead author of FOR578 - Cyber Threat Intelligence. He is also the Founder, CEO of Dragos Security and gained his start in cyber security in the U.S. Intelligence Community as an Air Force Cyber Warfare Operations officer. He may be found on Twitter @RobertMLee 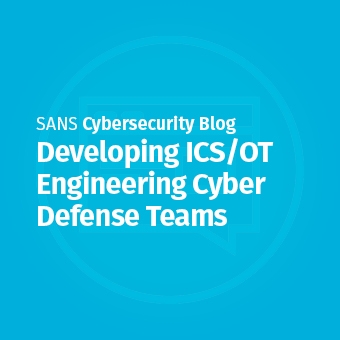 Industrial Control Systems Security
Developing ICS/OT Engineering Cyber Defense Teams
ICS security managers don't get to choose if they're a target of a cyber attack, but do get to choose many things about their OT security program.