Well I certainly didn't plan on three months elapsing between my last post on EXT4 and this follow-up, but time marches on. That was supposed to be a clever segue into the topic for this installment- the new timestamp format in the EXT4 inode. OK, I know what you all are thinking now: "Shut up Hal and get to the geeky stuff." Your wish is my command!

Let's set up another test file in an EXT4 file ssytem:

I'm using the touch command as root to explicitly set the atime and mtime values so that we have some interesting timestamp values to look at- otherwise, all of my timestamps would be set to the instant that I created the new file. One thing I want to point out here is that I'm setting both the atime and mtime to a dates far in the future, which in older Unix file systems would normally cause problems because of the 32-bit date rollover issue (or "year 2038 problem" as it's sometimes called).

Now let's compare the output of the standard Linux stat command, the Sleuthkit's istat output, and debugfs' version of stat:

I've edited the output to make it easier to focus in on the timestamps. As you can see, all three commands basically agree on the mtime and ctime values. But both istat and debugfs stat have problems interpreting the atime value from 2111, though the stat command gets it right.

You may have also noticed some other new features in EXT4:

EXT4 has provided much of this functionality by moving to 64-bit timestamp fields- this gives you enough resolution to support nanosecond timestamps and still have a couple of bits left over so you can have dates extending into the future.

Show Me the Bits

But as I mentioned in the previous installment, the EXT4 developers tried very hard to maintain backwards compatibility with the EXT2/EXT3 inode layout. 64-bit timestamps and a completely new file creation timestamp obviously complicate this goal. The EXT4 developers solved this problem by putting the extra stuff in the upper 128 bits of the new, larger 256-bit EXT4 inode.

Here's the hex editor view (refer to Part 1 for the process of carving out the correct inode): 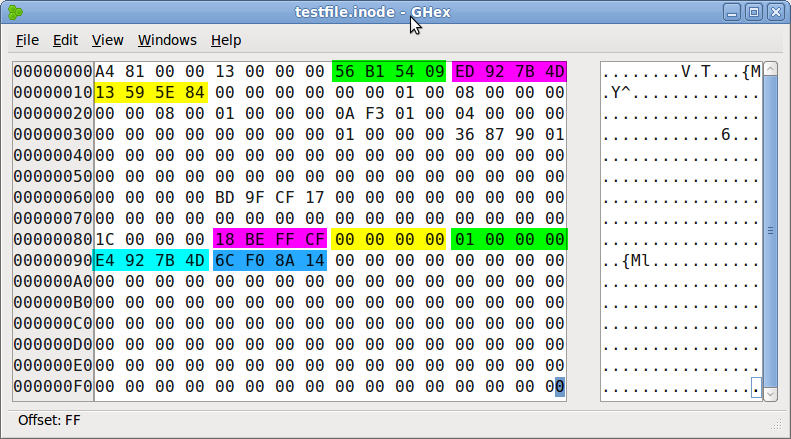 Counting from zero at the start of the inode, here are the byte offsets and meanings for the various highlighted fields:

The standard MACtime values near the beginning of the inode are essentially unchanged. They store the number of seconds since Jan 1, 1970 (aka the Unix "epoch"). However, EXT4 treats these values as unsigned integers, rather than signed values as the original Unix file system spec called for. Using the extra bit actually turns our "year 2038 problem" into a "year 2106 problem".

You can actually see this in action with our mtime value from the year 2040. Converted from the little-endian format that the inode uses, our hex mtime value is 0x845E5913, or 2220775699 decimal- a number that would normally cause roll-over in a 32-bit signed value. We can convert this decimal value to a human-readable date with a little shell magic and the GNU date command:

If you compare with the stat output from earlier, you can see that we've computed the correct value.

However, in the upper 128 bytes of the inode there are also an "extra" 32 bits for each MAC timestamp- I've marked them here with corresponding colors, so it's easier to match things up. You can think of the "extra" fields as the nanoseconds portion of each timestamp. But you actually only need 30 bits to represent nanosecond resolution. So the upper 30 bits of the "extra" fields are the nanoseconds, but the lower two bits remaining are actually used to extend the seconds field in the earlier portion of the inode.

You can see now where istat and debugfs stat are going wrong in their output. They're only converting the standard 32-bit atime value from the beginning of the inode.

Bingo! There's the correct date that matches our touch command and stat output.

With the extra two bits, the largest value that can be represented is 0x03FFFFFFFF, which is 17179869183 decimal. This yields a GMT date of 2514-05-30 01:53:03, which certainly pushes our date rollover problem quite a bit further out. Still, it's not clear to me that we actually need nanosecond file timestamp resolution. I wish the EXT4 developers had chosen less precision and given me another 2-6 bits to extend the lifetime of our timestamps. On the other hand, by 2514 none of this will probably matter anyway.

We can do the same thing for the change time "extra" field. The hex value 0xCFFFBE18 is 3489644056 decimal. Divide by 4 to get 872411014. If you refer back to the stat output from earlier in the article, you'll see that our computed value matches the fractional seconds that are reported for ctime.

Wrapping Up For Now

At this point we've covered the main EXT4 inode changes that impact most users- extents and the new timestamp format. But the discussion of extents in Part 1 skipped over the issue of what happens when the file becomes so fragmented that you actually need more than the four available extent structures in the standard EXT4 inode. That will be the topic for the next installment of this series.

By the way, if you think this sort of low-level file system analysis is fun and interesting, Chad Tilbury and I will be teaching SANS' For508 class via vLive! starting in June. We spend a lot of time in For508 getting down and dirty with NTFS, FAT, and EXT. So fire up your hex editors and join us on-line from the comfort of your home or office for some wacky file system fun!

Hal Pomeranz is an independent Forensic Consultant, a SANS Institute Faculty Fellow, and a GCFA. He's getting a little squinty from all the time with the hex editors.