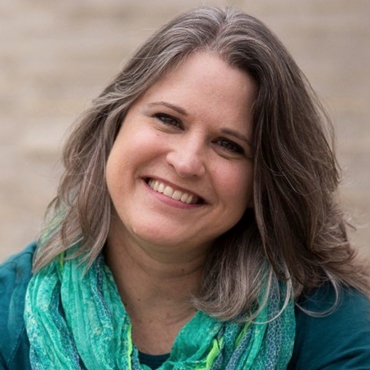 Go, Pokémon Go! I admit it. I was anxious to play Pokémon Go, the hot new "augmented reality" app. Not because I follow the newest styles and trends.

Listen to the webcast here

UPDATED 7/22/16 — Thanks to Warren Raquel (@warquel) a Senior Security Engineer at the National Center for Supercomputing Applications, Android location information has been SOLVED! See the Android Location Information section below.

"Some trainers have no fear. To them this is just one more challenge. They follow their hearts. That is what sets them apart, and will make them Pokémon Masters." — Miranda, Pokémon: The First Movie
Pokemon Go Gameplay 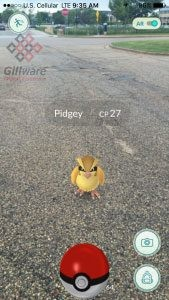 And for that, I needed test phone data!

I installed the app on a test iPhone and Android devices, created a "Trainer" account with a test Gmail account, and went to work?. er, play. Sometimes it turns out that work and play are one and the same. In the name of science.

Shortly after installation, I found myself in position to capture a blue, swirly, Poliwag near a curb. A few seconds later, "Gotcha!" Less than a minute later, up popped a Pidgey, in the middle of the road. So I stopped to grab him too, fully aware that I was in the middle of the road. I quickly gained insight into how this game could get dangerous. 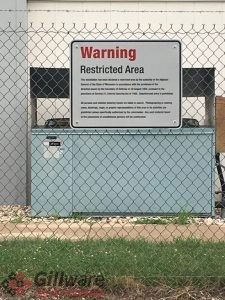 Things got strange pretty quickly. As I walked down towards the Wisconsin National Guard, Pokémon Go alerted me that there was a Pokestop and two Pokémon to be captured — behind the fence. Restricted AreaI decided not to go there. And as I swung my cell phone camera towards the secured area, I wondered if the images I might capture were going anywhere. And if so, where? Hundreds and thousands of Trainers running around the world photographing every nook and cranny in the name of capturing imaginary creatures? Conspiracy theorists will be having a field day. Gate guards will be having headaches!

I returned to the Gillware offices to find that my research was generating interest and enthusiasm. Or maybe it's that I'm working with like-minded people. Either way, the Gillware gang was also busy gathering data for research purposes (and fun, too), and they were anxious to share what they were finding with me. So, we sat down at lunch and geeked out over the forensic possibilities. Here's a little bit of what we found: 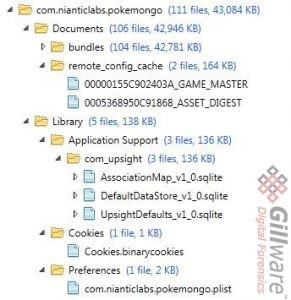 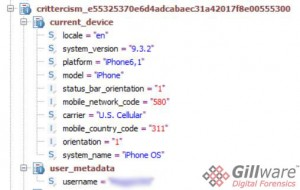 The data stored in the "bundles" directory was not in human readable format, and is encoded or encrypted. The date and time stamp for each of the blob-like files corresponds to when the game was being played. For now though, I have yet to answer the question about where those pictures are going, and also about how and if geo-location data related to user activity is stored within the app. If it is, it's likely in those mysterious "bundles," or maybe in the "com_upsight" folder.

The "com_upsight" sub directory in the Application Support folder contains three SQLite database files, each of which has multiple .plist formatted entries. A Google search shows that Upsight is a marketing and analytics platform for web & mobile application developers that assists in improving engagement and tracking user behavior. I'm still working on the .plist files stored there. Their dates and times also correspond with user activity. From a forensics standpoint, date and time stamps from these files can help us determine whether the game was being played when a particular incident happened. 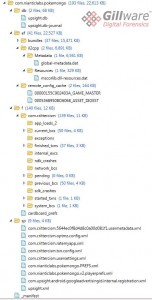 The com.nianticlabs.pokemongo.PREFS.xml file contains the account name for the user in plain text:

Inside the app data for the Android device there are a variety of Pokémon Go "encounter" dates and times logged in the com.crittercism folder in the subdirectory named "f". Crittercism (now known as Apteligent) is an Application Performance Management system. I don't know at this point in my research whether all events are logged or only events related to errors. Either way, there are a large number of individual files with the naming format 1.1468422937026.00000000X (where X is a sequentially progressing number) which contain really interesting data.

When these files are sorted by date/time, the sequential nature of the file names is clearly noted.

Application errors
Application loads
Session starts
Session finishes
Wild Pokémon encounters
Pokémon captures
Encounter updates
Successful encounters of wild Pokémon
Additions of wild Pokémon
Attempted encounters
Caught Pokémon
Cell removals
This is good for forensic examiners. If we need to know whether someone was playing Pokémon Go at the time of a particular incident — say for example an armed robbery or a traffic accident, these Android based application files will be of great assistance.

Each of these files is a logged event in plain text that gives a short explanation of the event being logged and the time stamp. Location Information appears to be identified as "cells" with a long numeric number. It seems logical that these cells are likely mapped to GPS coordinates, but I'm still researching this.

Collaboration is an amazing and rewarding thing. Thanks to Warren Raquel (@warquel) a Senior Security Engineer at the National Center for Supercomputing Applications, the Android cell location mystery has been SOLVED! Warren somehow came across this post and reached out to me shortly after it was published to tell me he had some theories about the location cell identifiers I had described above. He asked for some test data to work with.

I was exceptionally happy to have a new member of team Pokémon Go Forensics, and obliged. I sent him six examples of various cell identifiers from different Crittercism log files. Here's what the data I sent him looked like: 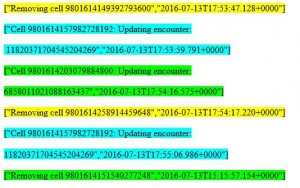 Warren theorized that the 19 digit cell ID number could be two concatenated numbers which, when divided by 1e6 resulted in lat/long information. I found this post, and thought he was likely onto something.We both went to work (or is it play?).

Warren took the cell ID numbers and played with them in various ways. Shortly later, he emailed me and sent me the cell numbers converted to Hex:

Warren emailed me this morning to let me know he'd had a Pokémon Go "Gotcha!" moment. He captured this difficult artifact with a great deal of persistence and diligence. The cell numbers refer to Google's representation of the global map in a Hilbert Curve. He used the s2 library in order to convert one of my example cell ids (8806542340000000). Here's the output: 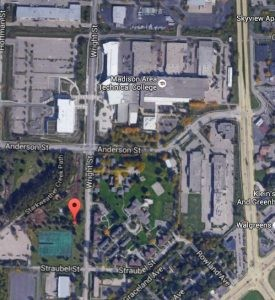 As far as the 19 digit encounter ID is concerned, Warren and I both think that it's likely a 64bit representation of a particular Pokémon that contains bits to represent characteristics like type of Pokémon, strength, and that sort of thing. I'll be looking into my Pokédex to make some comparisons, for sure. Thanks again, Warren (@warquel) for the time and effort you took researching this location artifact and figuring out the cell location mystery. Nicely done!

The Android App
I used the tools and tips from last week's HummingBad post to peek into the Pokémon Go app. There's a lot there to get through, but it gives some insight into some of what we see stored on the phone itself, and potentially about the way data is stored on the device and where it might go. Here's what the layout of the apps classes looks like in Dex2Jar: 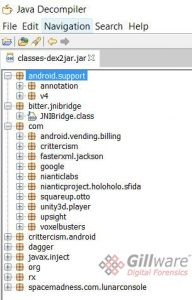 That's the way forensics goes most of the time, and part of why it's such an adventure. Anything you dig into can potentially send you down another interesting path in pursuit of forensic artifacts. And digging into an app like Pokémon Go is just as much fun (if not more) than playing the game itself.

Learn at your own pace with four months of online access:

Digital Forensics and Incident Response, Cybersecurity and IT Essentials, Industrial Control Systems Security, Purple Team, Open-Source Intelligence (OSINT), Penetration Testing and Ethical Hacking, Cyber Defense, Cloud Security, Security Management, Legal, and Audit
Good News: SANS Virtual Summits Will Remain FREE for the Community in 2022
They’re virtual. They’re global. They’re free.
Emily Blades
read more
Blog
Digital Forensics and Incident Response
WMIC for incident response
Earlier this week, I posted about using psexec during incident response. I mentioned at the end of that post that I've been using WMIC in place of psexec and that I'd have more on that later. This post, is a follow up to the psexec post. WMIC Prompted by the excellent work of Ed Skoudis and his...